Ancient American Indians began marking the Kentucky landscape in new ways sometime between 500 BC and AD 250 by building burial mounds and geometric enclosures from earth.   Archaeologists often refer to these people as the “Adena” culture.  Evidence for Adena societies generally date toward the latter half of the Early Woodland period (ca. 1000 – 200 BC) and the front end of the Middle Woodland period (ca. 200 BC – AD 500) a time when humans across Eastern North America were increasingly relying on gardening local plants for food and moving out of floodplain environments and into uplands like the rolling hills of Kentucky’s Bluegrass Region.  This was also a time of increased interregional interaction and trade in foreign objects made from marine shell and sharks teeth from the Gulf and Atlantic coasts, mica from the Appalachian Mountains, copper from around the Great Lakes, and obsidian from the Rocky Mountains.  Many archaeologists associate the height of these elaborate trade networks, earthworks, and burial mounds with the Middle Woodland period and attribute their appearance to the “Hopewell” culture centered in southern Ohio.

Traditionally, archaeologists have considered Adena a precursor to Hopewell.  However, some have begun to examine their differences as local variations on broader cultural and religious themes.  This is because both groups inhabited similar areas of the Ohio River Valley, overlap in time by hundreds of years, and practiced similar rituals surrounding the movement of exotic goods and the construction of burial mounds and geometric earthen enclosures.  Much of what we know about Adena in Kentucky comes from excavations run by the University of Kentucky through New Deal depression-era work relief programs like the Works Progress Administration (WPA).  This research was conducted around the time radiocarbon dating was invented, so archaeologists remain unsure how Adena and Hopewell relate to one another in time.  Furthermore, since most Adena and Hopewell archaeology has focused on burial mounds, no one knows how earthen enclosures in Kentucky compare to the larger geometric enclosures in Ohio.  The Adena Landscapes Project aims to start filling these voids in our knowledge of Kentucky’s past with respect to Early/Middle Woodland geometric enclosures and larger cultural trends in the Ohio River Valley.

Building earthen enclosures involved two major steps: digging a shaped ditch (e.g., circle) and mounding the dirt to the outside.  This creates an embankment exterior to the ditch but also isolates or “encloses” an interior platform.  Causeways were left open as entrances and exits.  Sometimes wooden post structures were built inside these areas to prevent anyone from seeing what took place inside.  A good example of such an enclosure in Kentucky is the Mount Horeb earthwork in Northern Fayette County. 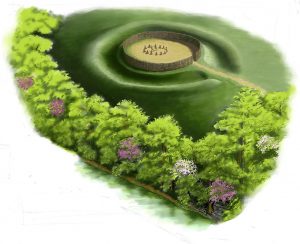 An artist’s depiction of the Mount Horeb enclosure. Original artwork by Jimmy A. Railey, used here courtesy of the Kentucky Archaeological Survey.

Evidence from the Mount Horeb enclosure suggests people who built and used the site cleaned up after their gatherings.  Only a handful of artifacts (e.g., a few projectile points, one broken piece of pottery) were recovered from the site when it was nearly excavated completely by University of Kentucky archaeologists and WPA laborers in 1939. 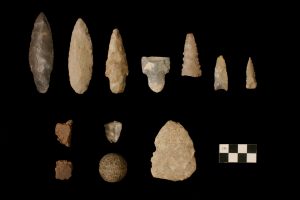 Artifacts recovered from excavations at Mount Horeb enclosure in 1939. Photograph by Hayward Wilkirson.

We wanted to find and excavate a variety of earthen enclosures across the Bluegrass to compare similarities and differences in how they were built.  We also wanted to find out when these enclosures were built and how quickly they appeared in Central Kentucky.  Understanding how (and how quickly) these sites were built, as well as how (and for how long) ancient Kentuckians used them, gives us new ways to think about the spread of ideas and ritual practices across the ancient Eastern U.S.  Work on the Adena Landscapes Project has taken place in various counties across the Bluegrass.  We have utilized cutting-edge technology like aerial laser scanning (LiDAR), geophysical remote sensing, GPS, and photogrammetry to find and map enclosures that are nearly invisible on the ground—almost destroyed by modern agricultural practices. 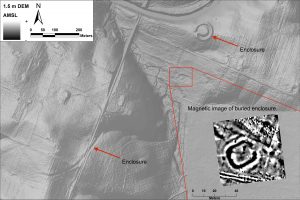 A bare-earth digital elevation model (DEM) of a collection of enclosures in Central Kentucky. Inset picture is magnetometer imagery from an enclosure that is not visible on the ground. The black ring corresponds to the buried ditch; the white area surrounding that is the signature of the embankment. Note the break in the ditch that represents the causeway into and out of the interior space.

Although we just finished fieldwork in March, we already recognize a few patterns from our work.  For instance, we know that the land on which many of the enclosures were built was burned just prior to construction.  This may have had a functional and/or ritual purpose.  Removing vegetation with fire would have made digging ditches easier but may have also held a symbolic purpose, cleansing the landscape prior to constructing something sacred there.  Embankments preserve these ancient ground surfaces after construction, allowing us to collect charcoal and date the time before construction.  We are also using a method called Optically Stimulated Luminescence (OSL).  This will tell us when quartz and feldspar grains in the ancient buried surfaces were last exposed to sunlight.

Although ancient American Indians in Kentucky didn’t have metal digging tools, they dug deep!  Almost every enclosure we examined had ditches that were excavated to bedrock, varying from about 1.4 to 2 meters (4.5 to 6.5 feet) deep.  In some cases, ancient excavators went through layers of deteriorated bedrock before stopping.  While some of the better-preserved enclosures gave us an understanding of how they were built, others provided information on what happened when these sites were abandoned.  A few enclosures we examined were barely visible because their ditches had filled in.  When we excavated these sites we realized much of the refilling was not natural.  Instead we found patches of burning, portions of burned logs that date to this era, and pockets of clay and bedrock that may have originally been in embankments. 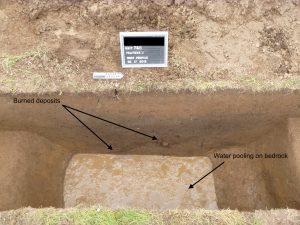 Does this mean that societies who inhabited the Bluegrass after Adena/Hopewell deliberately destroyed these sites?  Perhaps.  However, more work is needed on sediments collected from each ditch before we can say for sure.

We are just getting back radiocarbon and OSL dates from our excavations.  At first glance we can see that these sites were being built faster and later in time than previously thought.  However, statistical analyses of these dates will refine our understanding of their time ranges. More dates are being submitted and we will have a better handle on this in the near future.  However, one thing is certain: we know that these sites were kept very clean.  The total number of artifacts we collected from our excavations at roughly 10 sites could fit in a shoebox.  This may indicate that geometric enclosures were indeed considered sacred and required cleaning after rituals were conducted inside.

Although we are still processing all the information we collected over the past three years, new insights gleaned from the Adena Landscapes Project are already providing a fresh understanding of the people who built burial mounds and geometric enclosures across Kentucky’s Bluegrass Region.  We are beginning to reveal a picture that portrays very rapid human alteration of the landscape for ceremonial practices rather than a prolonged evolution of earth building.  Our work is also slowly revealing that these “Adena” people may not have been precursors to what many have perceived as their Hopewell counterparts.  As our results get refined we may begin to realize that people who lived in Kentucky around 200 BC-AD 500 actually influenced larger social movements like Hopewell, instead of just co-existing alongside them.