Kentucky Archaeology Month Day 11 – Documentation of the Craig-Ewalt Farmstead and Cemetery in the East Bend Area of Boone County, Kentucky

Gray & Pape, in cooperation with the Boone County Public Library, the Boone County Historic Preservation Review Board, and the Rabbit Hash Historical Society, conducted a pro bono archaeological and architectural assessment of the log Craig-Ewalt House (Be-315) and documentation of the Craig Cemetery in the East Bend area of Boone County. This research was conducted as a “rescue archaeology” effort to document the site prior to removal of the log house and subsequent grading and contouring of the landscape. The log house (Be-315) was reconstructed on a nearby farm in Petersburg, Kentucky, in late April 2015.

The land upon which the Craig-Ewalt House (Be-315) was built was originally part of a 20,440-acre tract granted to Capt. John Hawkins Craig on September 6, 1785. According to local folklore, Samuel J. Ewalt and his wife, Polly (a freed African American slave), resided in the home until flooding forced them to higher ground further east. The earliest map of the area that depicts structures and landowner information dates to 1883, and shows the property belonging to either Oliver H. Craig or Charles C. Craig; both of whom were great-grandsons of Capt. John Hawkins Craig. 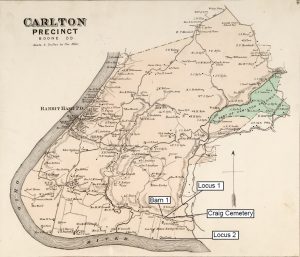 Capt. John Hawkins Craig was born in 1730, in Spotsylvania County, Virginia, and moved to Kentucky, along with his family, in 1781; where he was commander at Bryan Station during the August 15-17 siege by British-led Shawnee and Delaware. In 1796, prior to the formation of Boone County, he represented Campbell County in the Kentucky Legislature, and was the first representative sent by Kentucky to the Virginia Assembly. The community of Burlington (originally known as Craig’s Camp) was built on land donated by Capt. Craig. John and his wife, Sallie Page Hawkins, had 10 children; including a son who was also named John Hawkins Craig (born March 14, 1763 [referred to here as John Hawkins Craig, II]). John Hawkins Craig, II, also served in the Continental Army during the American Revolution; joining in 1780 as Assistant Deputy Quartermaster General in Spotsylvania, Virginia, and later volunteering in Kentucky as a private from 1781-1783, under Capt. Robert Johnson and Gen. George Rogers Clark.

Following the death of John Hawkins Craig, II, on April 8, 1852, the property changed ownership several times and was eventually acquired by William Ewalt, of Pittsburgh, Pennsylvania, who subsequently bequeathed it to his son, Samuel J. Ewalt, in 1861. Samuel J. Ewalt and his wife, Polly, appear to have remained in the house until at least 1863. The property returned to the Craig family in 1878, when it was purchased by Oliver H. Craig (a grandson of John Hawkins Craig, II), who then sold it to his brother, Charles C. Craig, in 1879.

Archaeological field methods included trench excavation, soil coring, metal detection, and ground-penetrating-radar. During the course of this research, two distinct historical-period occupation areas were identified: one just south of Beaver Road (KY 338) where the Craig-Ewalt House (Be-315) stood until it was dismantled in April 2015 (Locus 1), and a second, earlier occupation (Locus 2), situated approximately 815 m (2,674 ft.) directly to the southwest of Locus 1 at the northern bank of the Ohio River. Remnants of an old roadbed connect both loci. Both this road and the residence associated with Locus 2 are depicted on the 1883 Boone County Atlas.

Locus 1 represents the site of the Craig-Ewalt House (KHC Resource Be-315) from approximately 1884 until April 2015. The surrounding yard has experienced significant ground disturbance, which makes it unlikely that any subsurface archaeological features (such as privies or middens) associated with the late nineteenth century occupation have survived. Artifacts recovered from Locus 1 span the occupation of the house. However, the presence of a key opener and an 1879 penny within the fill surrounding the cellar foundation of the rear ell indicates that it was constructed no earlier than 1879. No structure is depicted at this location on the 1883 atlas.\ 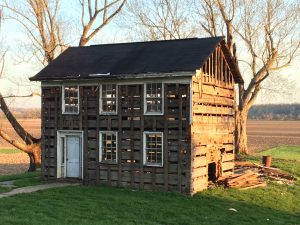 Interestingly, all of the logs used in construction of the main pen of the house exhibited coding tags carved into the wood. This suggests that the house had been disassembled and moved sometime in the past. 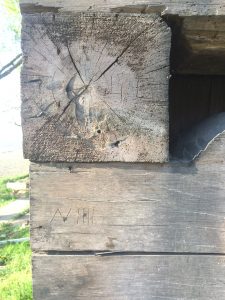 Locus 2 is an historical homestead site that appears to date from the mid- to late-nineteenth century. The artifact assemblage indicates a terminal occupation that is contemporaneous with the construction of the dwelling at Locus 1. It is likely that Locus 2 represents the original location of the Craig-Ewalt House (Be-315), which was constructed shortly after the property was acquired by William Ewalt in 1844. 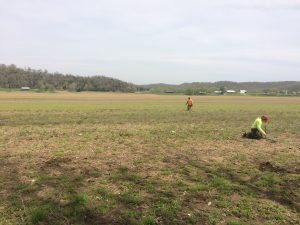 Archaeological, archival, and architectural analyses indicate that the Craig-Ewalt House (Be-315) was originally constructed at Locus 2, approximately 1/2-mile to the south of its location beside Beaver Road (KY 338) during the mid-1840s, by William Ewalt. By 1879, the house was occupied by Charles Craig, and appears to have been disassembled and moved shortly after publication of D. J. Lake’s (1883) Boone County Atlas. The impetus for moving the house was likely the February 1883 or February 1884 floods that devastated the Northern Kentucky region

The Craig Cemetery is located to the east of the house and a ground-penetrating-radar survey identified at least nine potential interments. This family cemetery appears to have been established in 1852, with the death of Capt. John Hawkins Craig, II, a veteran of the Revolutionary War. However, earlier graves may be present. Additional known burials include Franklin Craig and John P. Craig; both of whom are sons of Capt. John Hawkins Craig, II, and Sallie Snelling Craig. Historical research indicates that Sallie Snelling Craig is also buried in this cemetery. 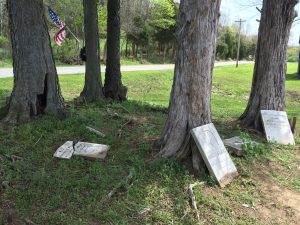 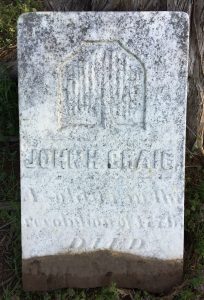 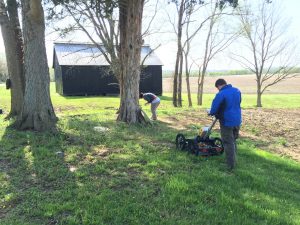 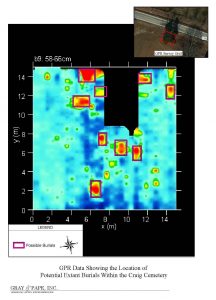 For more information about this project, a research report is on file at the Boone County Public Library and is also available at the following link: https://www.academia.edu/24072072/Archaeological_and_Architectural_Documentation_of_the_Craig-Ewalt_Farmstead_and_Craig_Cemetery_in_the_East_Bend_Area_of_Boone_County_Kentucky