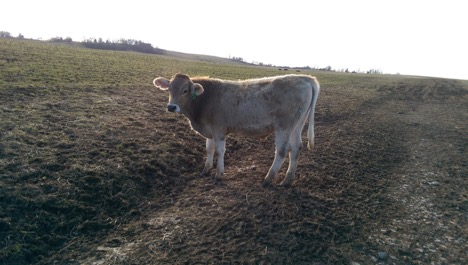 Edgar the Cow Playing it Cool.

This is Edgar, his connection to archaeology is not readily apparent, but he is a good representation of how archaeologists interact with the public.  As congressional committees question archaeology’s significance and slash NSF’s funding, Edgar has become a vital part of my story.  I first encountered Edgar at the end of a long day conducting a magnetic survey over a site that could be the focus of my dissertation. He was curious about the equipment and the van and I suspect he was especially interested in knowing if we had any hay for him to eat (he played it cool, so it was difficult to tell).  February had proven more conducive to fieldwork than expected and I decided to get as much done as possible before the weather turned. The land the site is located on is partially used for tobacco farming and, when not planted, is used for cattle grazing. This has often meant that I have had to schedule my fieldwork around the farmer’s schedule. I have had to do fieldwork in less ideal seasons, but I have also maintained a good relationship with the land owner.  This is important not only for conducting fieldwork on private property, but also for raising awareness about what archaeology is, as this could be one of few personal connections this particular landowner may have with a professional archaeologist.  How archaeologists interact with landowners can affect future work and how the public perceives archaeology. If I had not respected the landowner and his livelihood I, not only would have lost access to the site, I could have damaged the landowner’s perspective of archaeologists.  Positive interactions between archaeologists and the public are a great way to show the importance of archaeology.