Kentucky Archaeology Month Day 13 – You Never Know Till You Excavate

Though this blog is appearing a few days after the event, I want to comment on archaeology at the William Berkley Sutler Store site at Camp Nelson Civil War Heritage Park on Saturday, September 10, 2016. This excavation was part of the site’s Living History weekend, and was advertised as part of the KYOPA Archaeology Month activities. We do not know if this KYOPA listing added to our attendance (though we hope so); regardless we had a good turnout. Please everyone support the other listings of the KYOPA Archaeology calendar! (http://www.kyopa.org/kam-calendar/).

The Berkley Store site has been great for public archaeology as it is very accessible (and near public restrooms even!), and with the archaeology supported by Camp Nelson Civil War Heritage Park over the past several years. On many Saturdays volunteers have joined archaeologist Stephen McBride, and occasionally myself, his wife Kim McBride, as we learn about this site. Artifacts from excavations at Camp Nelson are on display at the site’s interpretive center, and we invite any interested persons to visit and see them, along with many other exhibits. Camp Nelson is located on US 27 six miles south of Nicholasville, and open Tuesday through Saturday, 9 to 5. Or check out www.campnelson.org. 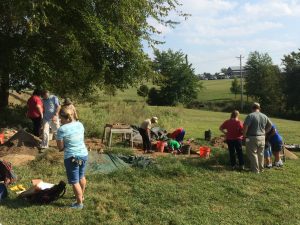 The Berkley Sutler store is part of the larger complex of archaeological sites at Camp Nelson. Camp Nelson was founded in June of 1863, as a U.S. Army established the Supply Depot and Recruitment Camp in southern Jessamine County, Kentucky. This camp covered over four thousand acres, had over three hundred wooden buildings, and housed two to eight thousand soldiers and one to two thousand civilian employees. In order to house and support these soldiers and civilians, the army constructed barracks, mess houses, a bakery, a slaughter house, a saw mill, woodworking shops, a prison, a hospital, and provided numerous tents.

The army also allowed private merchants to establish businesses providing goods and services to soldiers and employees within Camp Nelson. Documented business establishments include two taverns, various eating houses, a post office, a photography studio, a billiards parlor, a boot shop, fruit and vegetable stands, and numerous sutler stores. Sadly no photographs exist of any of these structures. While as many as seven sutler stores are mentioned in Camp Nelson documents, only one merchant, William Berkley, was licensed to keep a sutler store within camp. The others were probably regimental level sutlers as well as a few operating without proper permission.

Civil War Sutler stores came in many shapes and sizes, including being hastily constructed log structures, more substantial frame or board-and-batten buildings, or even in re-utilized antebellum buildings. The excavations at the Berkley store have revealed a series of post molds and pier remnants, and thousands of nails, and suggest that the store was a substantial wooden building, probably with at least two rooms.

Another reason to do the excavations has been to learn about the types goods sold at the store, and the activities taking place there. Sutler stores were general merchants licensed by the army to sell goods to the soldiers. They sold items desired by the soldiers, particularly items not provided by the army, such as fresh and dried fruits and vegetables, eggs, cheese, nuts, canned foods such as sardines, smoked oysters, and condensed milk, as well as butter, coffee, fried pies, condiments such as mustard and pepper sauce, liquor and ales, tobacco, patent medicines, soap, candles, pots and pans, personal items such as combs, handkerchiefs, candlesticks, pencils, pens, razors, and smoking pipes, and clothing such as socks, neckties, suspenders, underwear, and hats. Food and drinks were often served at sutler stores off a bar or counter. 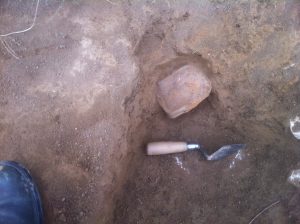 Sardine Can from Sutler Store.

The prominence of two artifact types found at the store site tell us a bit about common activities there. These artifacts are sardine cans and smoking pipes. Both of these suggest that the soldiers not only bought items at the store, but hung out there to enjoy them and probably to socialize. But as is often the case, the archaeology has greatly expanded the understanding we had just from the documents, in presenting several classes of unexpected items. The unexpected items found just north of the main store building include parts of small picture frames, glass plates, and photographic “preservers” or mats. We also found nine folded brass stencil plates and two folded cut brass sheets were also discovered at this site, indicating that stencil cutting took place here. These artifacts relate to two practices of Civil War soldiers; having photographs taken of themselves to send back home, and using stencils to label their clothing or personal items. While the documentary record told us there were photographic studios at Camp Nelson, we did not know there was one affiliated with the Berkley Sutler store until we found these items. And better yet, the photographer even left us his name; C. J. Young, as he practiced. Two finished stencil plates read “C. J. Young” and “C. J. Young Artist”.  We know from an advertisement in a Lexington City Directory that Mr. Young set up a studio in Lexington after the Civil War ended. He later moved to Cincinnati, where he enjoyed great success. Locating him in the federal census records tells us that he was just a young man of 15 or 16 years old while at Camp Nelson. 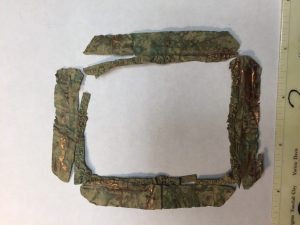 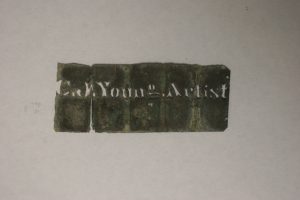 So thanks to the many avocational archaeologists who have helped with the Sutler Store excavations. The work this weekend adds to a long tradition of volunteer contributions at the site, and reinforces the expression archaeologists like to say, that “you never know till you excavate.”