It was the War of 1812 and what would later become Carter Caves State Resort Park in the mid-twentieth century was now part of Greenup County. Men worked in dark, dirty, sweaty conditions underground digging into the earth and hauling water to the vats.  Their goal?  To create something called “niter beer”, which would be combined with potassium lye to create saltpeter – one of the three key ingredients in gunpowder.

We don’t know the names of these men. We don’t know who they worked for, who owned the mining operation, or exactly how long they worked in the cave.  In fact, there is only one name we can associated with the mining operation – that is “Colonel” John Plummer.  His descendants’ family Bible tells us that he and two other men supplied wild game to feed the miners.  His however-many-greats-grandson Sam just retired as Park Naturalist, so the family has a long connection to the caves.

The archaeological research I was fortunate enough to conduct in this cave – Saltpetre Cave at Carter Caves (also known as 15Cr99) – told us more about what happened during the mining operation. 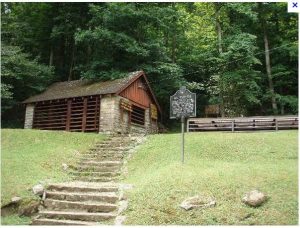 And it led to many other questions that have yet to be answered all these years later.  That is much of the fun and frustration of being an archaeologist!  I always compare doing archaeology to working a jigsaw puzzle, except you don’t have the picture on the box as a guide and you always know for certain that some of the pieces are missing, so you will never completely solve your puzzle.  It’s still a lot of fun to try, though. 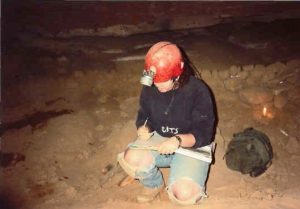 I learned that the miners operated the vats in pairs. There are about 15 pairs of vat remains in the cave.  You see, it appears when the miners stopped working they simply walked away with dirt still in the vats.  Over time, the wood disappeared – it was probably used for firewood or for torches – and the dirt inside the vats had hardened like concrete.  Today you can visit the cave and still see board impressions on the sides of many of the vats.  It’s pretty cool when you think that they are over 200 years old! 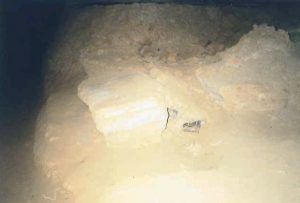 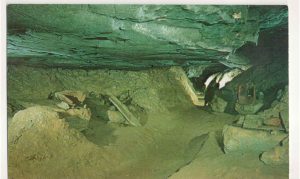 I learned that the processed an awful lot of dirt in the cave – possibly as much as 22,000 cubic feet (or almost 177,000 bushels)! Local legend says that the gunpowder made from the saltpeter manufactured here was used in the Battle of New Orleans.  I don’t know if that’s true or not, but it’s been the story for almost 200 years.  Maybe one day we will know for sure.  Until then, that’s just one of the many questions that keep me interested in the archaeology of Saltpetre Cave at Carter Caves! 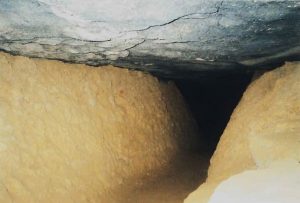 This is all spoil dirt that was emptied out of vats after miners poured water through it to dissolve nitrates out. Now it forms walls as part of the tour trail.

Another aspect of archaeology we incorporated into this research was experimental archaeology. With help from friends and staff at Carter Caves, we built a replica vat based on the real ones we found through archaeological research. 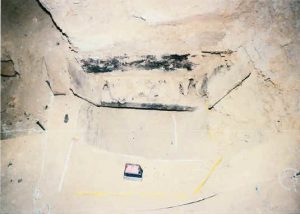 The excavated real vat – which is preserved in the cave. 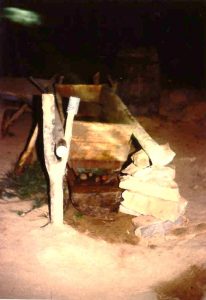 The replica vat that you can go see on a tour!

Take a trip to Carter Caves and experience nature and history and archaeology all in one place!

I also found this item under one of the rocks supporting the side of a vat. It is probably made of plant or tree material, but beyond that, nobody knows what it is made of or what it was used for. Any guesses? 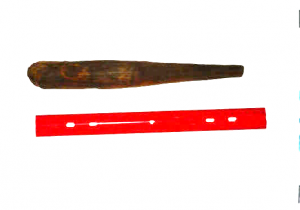