Kentucky Archaeology Month Day 26 – It All Started with a Truck: How UK’s Department of Anthropology came to be

This year marks the 90th Anniversary of the University of Kentucky’s Department of Anthropology—so enjoy this post commemorating how archaeology and the need for a truck got it all started!

The story of how the University of Kentucky Department of Anthropology came into existence begins with a tale of two professors who were enthusiastically interested in learning about the natives of Kentucky. These two men were William S. Webb (then head of UK’s Physics Department) and William D. Funkhouser (at the time head of UK’s Zoology Department).

Webb and Funkhouser would set the stage for what we now know about Kentucky archaeology by spending their weekends in Eastern Kentucky—exploring remnants of prehistoric peoples and doing amateur archaeology. This is where the need for a truck comes into the story. In order to be able to continue their weekend explorations, Webb and Funkhouser decided to apply for a grant from the National Research Council for a field truck. To qualify, they needed to create a department. Thus, the Department of Anthropology and Archaeology was founded at the University of Kentucky in 1926. 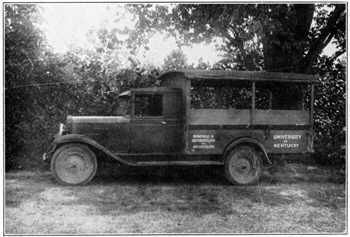 At first, Webb and Funkhouser were the only two faculty in this department: Webb acted as the head of the department, and Funkhouser taught anthropology courses. Even while conducting archaeological fieldwork, and starting this new department, both men remained active in their former departments; Webb is one of few people to have been the head to two departments (Anthropology and Physics) at the same time. William Haag (another prominent figure in KY archaeology) would later go on to say that the department was established more as a budgetary unit than an academic one. Still, in the late 1920s the University of Kentucky was one of the few universities in the United States to have an independent anthropology department, and at the time, this anthropology department was only the second in the Midwest.

While the early fieldwork by these men would not hold up to today’s excavation techniques, we are lucky that they were scientists and understood the importance of recording details and the context of what they found. They recognized several different prehistoric cultures of Kentucky, including what they called the Fort Ancient, Hopewell, Stone Grave, Iroquois, Algonquin, pre-Cherokee, and Western River cultures (see 1928 Ancient Life in Kentucky– Webb and Funkhouser’s synthesis of prehistoric Kentuckians for a general audience). Sites identified included earth mounds, shell mounds, earthworks and fortifications, village sites, cemeteries, rock shelters and caves, quarry sites, and pictographs, among others.

Webb, Funkhouser, and others continued to excavate and write about Kentucky archeology through the Great Depression, but World War II saw a halt to much of this work. The Department of Anthropology did begin to grow as a unit slowly after the war and by the mid-1950s the department had three professors. Today it has over 20 faculty and 15 staff, who conduct cultural and archaeological fieldwork, curate archaeological collections, write books, and teach students at the University of Kentucky.

And to think, the building blocks of this all started with a truck.

A New Deal for Southeastern Archaeology by Edwin Lyon