You may not realize it, but there are archaeological sites at nearly every one of Kentucky’s 49 State Parks. From Saltpeter Mines and Plantations to Prehistoric Sites archaeologists have worked with Park Interpreters to tell the Kentucky stories that were never written down. Check out the museum at Blue Licks Battlefield for an incredible exhibit that interprets both the historic battles, but also the prehistoric village site Fox Farm (http://parks.ky.gov/parks/resortparks/blue_licks/).

Here is a video on the early days of the Kentucky Archaeology (best viewed on Internet Explorer) http://archaeologychannel.org/player/player.php?v=wpaarch.mp4 – During the 1930’s the Works Progress Administration (WPA) sponsored excavations at 72 sites in several Kentucky counties. As Professor Duffield points out these projects were motivated by the need to put people to work not science. Despite that, the information gathered by these folks still influences research in Kentucky today. To visit a mound site like those featured in the video take a drive to western Kentucky to visit Wickliffe Mounds State Park http://parks.ky.gov/parks/historicsites/wickliffe-mounds/.

On September 17th at 3:30pm Wickliffe Mounds will have special demonstrations and hands-on activities for learning about archaeology at a kid’s level. Spear and atlatl throwing, Bows and Arrows, flintknapping, mock dig: simulate archaeological excavation for kids, artifact laboratory analysis and make and take home a pottery craft. Special exhibits about Mississippian Indian culture, foods and artifacts. An Archaeology Quest for kids will be available. Event is included in museum admission of $5 adults, $4 kids & seniors & military/veterans. For more information, please call the park office at 270-335-3681. 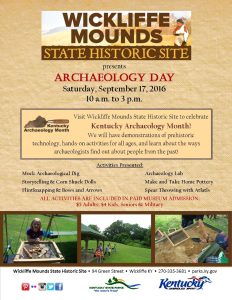