Kentucky Archaeology Month Day 4 – PEPO Squash and Three Sisters – or if you come to LAW, you can learn more and purchase an AWESOME ONE-OF-A-KIND T-SHIRT souvenir!

Living Archaeology Weekend is a free public archaeology event held every September at the Gladie Historic Site in the beautiful Red River Gorge of Daniel Boone National Forest in eastern Kentucky. Living Archaeology Weekend is a nationally recognized and award-winning program. This year you can join us in the Gorge on Sept. 17 (http://www.livingarchaeologyweekend.org). While you are there find the t-shirt tent to pick up this year’s incredible t-shirt featuring The Three Sisters. The LAW Steering Committee Shares their story below. 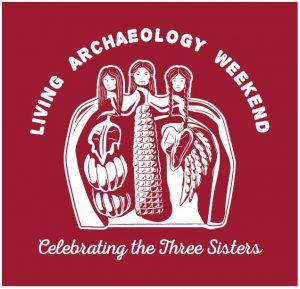 In almost every agricultural community worldwide and throughout time, successful farmers grew a cereal grain with a legume. For the Native farmers in eastern Kentucky, the cereal grain was corn and the legume was beans. Include squash, the ancient and familiar standby, and you have what many Native peoples still call the “Three Sisters.”

A thousand years ago, Native peoples living in eastern Kentucky left their ancestors’ hunter-gatherer-gardening way of life behind and embraced farming with a passion. By 750-800 years ago, farming villages were scattered across the region. Fields of corn, beans, and squash extended for miles along narrow floodplains. These people were successful farmers without plowing, irrigation, or chemical pesticides or herbicides. Managing this sophisticated, sustainable and productive farming system required that Native farmers understand crops, soil management, and their interaction like farmers do today.

The Three Sisters system depended on soil mounds and intercropping. Soil mounds increased soil temperature, permitted better soil drainage, helped maximize crop production, minimized erosion, and maintained the soil’s organic matter. Intercropping involved planting corn, beans, and squash together in mounds or hills spaced in a regular pattern in fields. One crop modified the environment to the benefit and the growth of another. All the plants thrived because they used nutrients, water, and light differently and therefore more efficiently. Because intercropping mimicked plant associations found in nature, all of the plants were resistant to drought, flooding, disease, blights, and insects.

Each Sister Plays Her Role

This integrated system was far greater than the sum of its parts. Given corn’s abundance, it was the main crop, but it required a fairly high amount of nitrogen. Beans, as nitrogen-fixing legumes, functioned as a natural fertilizer, greatly increasing the yield potential of corn and squash. Squash, with its shallow roots and aggressive leaf growth, reduced weeds and, by shading the ground, held in soil moisture and decreased soil erosion.

Dishes that combine corn and beans are a good source of complete, high-quality vegetable protein. With the highest protein content among the vegetables, beans also are a great source of fiber, are rich in iron, and contain lysine, a vital amino acid. Corn is relatively low in protein, and it lacks important amino acids. But corn is high in calories and carbohydrates. Squash is a good source of calories, fiber, dietary fat, folic acid, vitamins, and minerals not found in corn or beans, and its seeds are good sources of protein and oil.

The ancient Native farmers of eastern Kentucky were the original organic farmers, knowledgeable and skilled. Far from being primitive or backward, their farming system was sophisticated and sustainable. The Three Sisters system helped support farming peoples who used the land without destroying it.

Native people in North America’s Eastern Woodlands hunted wild animals and gathered wild plants. Over time, they gradually added domesticated plants, or cultigens, to their diets. These plants thrived in disturbed places like river floodplains and forest clearings. Native Americans grew these crops long before they adopted corn and beans from Mexico.

The 5,000-year-long story of native Pepo squash/gourd domestication is written in the burned and unburned seeds, rinds, and blossom scars preserved in many of the Red River Gorge’s dry rockshelters.

Squash remained an important food for Native peoples, even after they turned away from the EAC. Native farmers grew squash, along with corn and beans, as one of the Three Sisters. They passed on Pepo squash to European settlers. Over time, many EAC plants reverted to weeds. But people still eat squash, sunflowers, and a species of goosefoot called quinoa. We grow a wide variety of Pepo squashes in backyard gardens. Squash is still an important food today.

Cloudsplitter Rockshelter in Menifee County has produced some of the oldest Pepo squash seed and rind fragments in Eastern North America. The remains from Cloudsplitter and Newt Kash in Menifee County, and Rogers and Haystack in Powell County provide us with a picture of the complex domestication history of this important plant.