Kentucky Archaeology Month Day 5 – Tiny, tiny seeds that wouldn’t have been found without amazingly dry-as-Egypt-dry soil deposits. And did we mention, not without site protection and proper excavation, too?

This month we celebrate a wide array of interesting archaeology projects and public events that take place throughout the Commonwealth, especially the annual Living Archaeology Weekend (http://www.livingarchaeologyweekend.org/). LAW is Kentucky’s oldest and largest public archaeology event, which has taken place since 1989 in Daniel Boone National Forest/Red River Gorge. This year the 28th annual LAW will be Sept. 17 at Gladie Visitor Center in Slade, KY, and as always this is free to the public.

When you visit LAW, one souvenir you can take home is a seed packet….

Early Plants and the Red River Gorge #2: Goosefoot or Lambsquarters

What do eastern North America, Mexico, Peru, the Middle East, Africa, and east Asia have in common? They are all agricultural hearths, or centers of plant domestication (http://www.southeasternarchaeology.org/wp-content/uploads/LAW_Plant_Domestication_Handout.pdf) . At these hearths, prehistoric people selected seeds with certain desirable traits, like their larger size or thinner seed coats, and planted only them. Over time, the people’s choices domesticated the plants. Familiar examples are corn, potatoes, rice, and wheat. 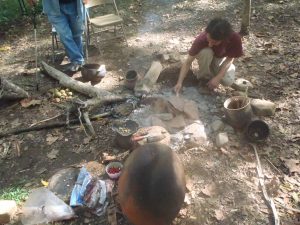 In the 1980s, archaeologists discovered that eastern North America was an agricultural hearth. Our Red River Gorge sites contributed to this discovery. They contain some of the earliest and best preserved evidence of prehistoric plant use. We know now that plant domestication began in eastern North America about 5,000 years ago.

Native people in North America’s Eastern Woodlands hunted wild animals and gathered wild plants. Over time, they gradually added domesticated plants, or cultigens, to their diets. They domesticated fleshy squash and eight different seed-producing native plants. The latter are called weedy because they thrive in disturbed places like river floodplains and forest clearings.

Goosefoot, named for the shape of its leaves, is a group of herbaceous plants with fleshy stems that die back each year. In late fall, they produce dozens of seed clusters with thousands of tiny seeds. As early as 8500 years ago, Native Americans collected wild goosefoot for its nutritious shoots, leaves, and seeds. Goosefoot is an excellent source of carbohydrates, fiber, and calcium. Seeds have more nutrients than most cereal grains. Unlike wheat, they are gluten free. Beginning about 3500 years ago, native peoples in Kentucky began to grow goosefoot. This caused physical changes in the plant and led to the domestication of one species: Chenopodium berlandieri. Compared to wild forms, its seeds are larger and have thinner seed coats (protective exterior layers).

Native peoples planted goosefoot by broadcasting the small seeds in garden plots. They used young shoots as herbs and ate goosefoot leaves as greens. Gardeners harvested the seeds by striking the plant with their hand or a stick, and catching the seeds in baskets. The starchy seeds were ground into flour or added to stews and gruels. Natives stored seeds in baskets, bags, and sub-surface pits for use as food year-round.

Archaeologists have found goosefoot seeds at sites all across Kentucky, including many rockshelters in the Red River Gorge. Domesticated goosefoot seeds from Newt Kash and Cloudsplitter in Menifee County were dated to 1500 BC. These are the oldest domesticated goosefoot seeds from the entire Eastern Woodlands! Goosefoot use declined sharply about 1000 years ago, when Native Americans adopted corn and beans from Mexico. Goosefoot now growing in Kentucky is the wild variety. Although few Americans eat goosefoot today, it was a very important crop for Native Americans in the past.

These seeds and the stories they tell us about long-ago gardeners would not have been preserved without the unique dry environment of the Gorge’s rockshelters. Unfortunately, rockshelters also attract looters….

Kentucky’s cultural heritage sites, the important places linked to our past, are being destroyed at an alarming rate. Much of this damage is caused by development as our towns and cities expand.

Looting, the illegal or unethical destruction of cultural heritage sites, destroys places that are not threatened. Looters often target Kentucky’s dry rockshelters, such as those in the Red River Gorge. They also target cemeteries, caves, and military sites.

Archaeological sites and cemeteries are nonrenewable cultural resources. Once they are destroyed, the information they hold about our past is lost forever. We must work together to preserve and protect these fragile places for future generations.

Why is looting such a bad activity? Looters dig for artifacts, grave goods, and human bones. They are not concerned about where something is found. They care about how much it is worth or how pretty it looks. ♦ Looters can destroy hundreds to thousands of years of history in just a few hours. They can disturb hundreds of graves in several months. ♦ Looters keep what they find for their personal collections. Even worse, they sell the items. ♦ Looting robs all Kentuckians of the chance to learn more about our heritage and to maintain our sacred places.

What can you do to help protect these fragile places? Do you know someone who is looting an archaeological site or cemetery? If you do, report their actions to local law enforcement authorities; the land managing agency responsible for the site; to the Kentucky Heritage Council (http://www.heritage.ky.gov/siteprotect) (502/564-7005) in Frankfort; or Dr. George Crothers (gmcrot2@email.uky.edu; 859/257-1944) at the Office of State Archaeology at the University of Kentucky in Lexington. ♦ Have you discovered human remains? If so, leave the remains in place – you may have stumbled on a crime scene. Report your findings to your county coroner and local law enforcement officials. ♦ Do not buy or sell prehistoric and historic artifacts. This encourages looting. ♦ Take action to preserve and protect cultural heritage sites. Become a steward of archaeological sites on your land or in your community.