This month we celebrate a wide array of interesting archaeology projects and public events that take place throughout the Commonwealth, especially the annual Living Archaeology Weekend (http://www.livingarchaeologyweekend.org/). LAW is Kentucky’s oldest and largest public archaeology event, which has taken place since 1989 in Daniel Boone National Forest/Red River Gorge. This year the 28th annual LAW will be Sept. 17 at Gladie Visitor Center in Slade, KY, and as always this is free to the public.

What do eastern North America, Mexico, Peru, the Middle East, Africa, and east Asia have in common? They are all hearths, or centers of plant domestication and agriculture. At these hearths, prehistoric people selected seeds with certain desirable traits, like their larger size or thinner seed coats, and planted only them. Over time, the people’s choices domesticated the plants. Familiar examples are corn, potatoes, rice, and wheat.

In the 1980s, archaeologists discovered that eastern North America was an agricultural hearth. Our Red River Gorge sites contributed to this discovery. They contain some of the earliest and best-preserved evidence of prehistoric plant use. We know now that plant domestication began in eastern North America about 5,000 years ago.

Native people in North America’s Eastern Woodlands hunted wild animals and gathered wild plants. Over time, they gradually added domesticated plants, or cultigens, to their diets. They domesticated fleshy squash and eight different seed-producing native plants. The latter are called weedy because they thrive in disturbed places like river floodplains and forest clearings.

Sunflowers were one of the earliest food crops. The nutritious seeds provide oil, fat, protein, fiber, calcium, magnesium, potassium, phosphorus, B vitamins, and Vitamin E. Prehistoric gardeners selected the largest sunflower seeds to plant from year to year. For this reason, domesticated sunflower seeds are longer and bigger than their wild cousins.

In late spring, Native Americans planted seeds in the moist soil of small gardens on the Red River Gorge’s hillslopes and floodplains. Spaced about one foot apart, the plants could grow to over eight feet tall. The ripe sunflower seed heads were ready for harvest in late summer and fall, easily harvested by hand picking.

Native Americans ate the entire seed, shell and all, or just the meat inside the shell, as we do today, alone or with other seeds in trail mix. They also ground-up sunflower seeds using hand-held tools, called grinding stones, or in depressions in large boulders, called hominy holes. They combined the ground sunflowers with meats or other seeds to make stews and gruels they cooked in clay pots. Seeds were stored to eat during the winter and to plant in the spring.

Today, sunflowers are one of the world’s most important oil-producing crops. We owe a debt of gratitude to the Native Americans who domesticated this plant thousands of years ago. 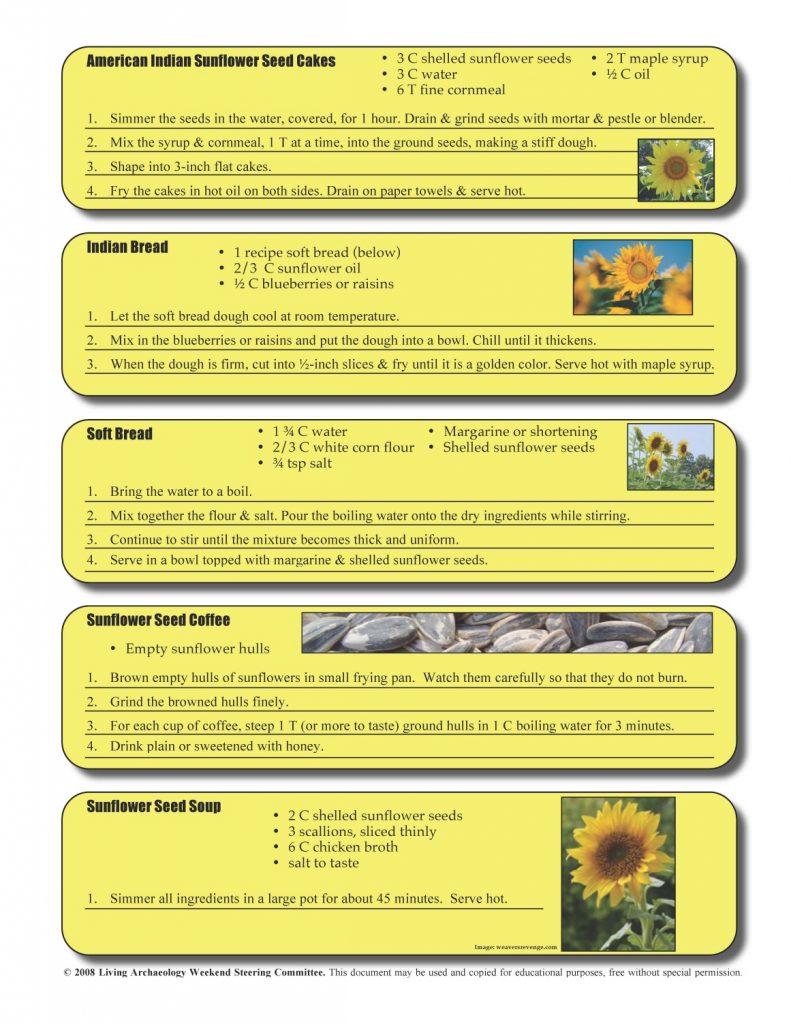