The Judd site (15Cu111) was a small habitation site in Cumberland County. The site was situated along two toe slopes between the base of the upland ridges on the east and a marshy intermittent tributary of Lewis Creek on the west. This creek is a small tributary of the Cumberland River.

The Judd site is distinguished from contemporary late Early Archaic/early Middle Archaic sites by the association of deeply site poles with Middle Archaic pits that have diameters greater than two meters, and depths below surface of more than one meter. The northeast-southwest orientation of the largest/deepest poles not only distinguishes the Judd site from its neighbors but raises questions concerning the site’s function. The association of poles with Middle Archaic features suggested that some may have functioned as sacred/marker poles, similar to those documented at later Woodland, Fort Ancient, and Mississippian sites. It also raises the possibility that pole ceremonialism has a much longer history in the eastern Woodlands than previously thought, and archaeologists working in the region need to be on the look-out for these types of features. 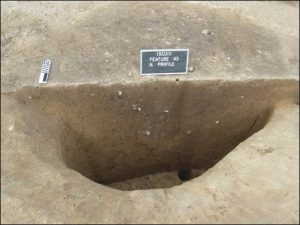 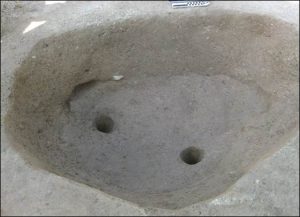