The Beecher Terrace Archaeological Project is the largest urban archaeology effort to date in Louisville. The project is focused on the Beecher Terrace Housing Complex, which occupies 12 city blocks on 39 acres between 9th and 13th Streets and Jefferson and Muhammad Ali Boulevard in downtown Louisville. The Beecher Terrace area lies directly to the west of the downtown area along 9th Street, which has become a symbolic and virtual “divide” between the predominantly black population of West Louisville and the eastern, more affluent predominantly white portions of the city. Built in 1939 as the second low-income residential development in Louisville specifically for African Americans, the aging complex is being replaced with newer housing. Beecher Terrace overlays the remains of more than 380 residences, commercial properties, institutions, and churches of a neighborhood developed in 1860-1870, although evidence of earlier pre-1850 occupations have been found in this early expansion of Louisville to the west. Historic research indicates the area was historically occupied by black and mixed-race working families, as well as German, Irish, and eastern European immigrants. The early neighborhood was found to have been populated by a high frequency of educated African American professionals within the decades immediately following Emancipation.

Phase I survey was done at the site by Corn Island Archaeology in January-February of 2017. This field effort was designed to mechanically to strip the disturbed overburden and look for cultural features, which the developers initially doubted would be found due to the degree of ground disturbance. Phase II evaluation was conducted in the spring of 2017. Together, the Phase I and Phase II efforts demonstrated the presence of numerous intact cultural features containing meaningful information that would enhance our understanding of the cultural and historic development of this area of Louisville. Three archaeological sites – 15JF293 and 15JF294 – were recorded as a result of this work. Most of the area is contained within a single archaeological site designated 15JF923. Site 15JF923 contains numerous privies, cisterns, and foundations beneath layers of fill, all related to the late (possibly mid) nineteenth century occupation of the property. Baxter Square Park, the first public burial ground of Louisville, was assigned site number 15JF924. Also called the Pioneer Cemetery, or Old City Cemetery, the graveyard was in use from 1786 until 1832. Although he cemetery is now used as a park, and the graves long forgotten, Site 15JF924 contains intact human interments. While some of the burials appear to have been relocated to nearby Jefferson Street Cemetery, fieldwork in two trenches revealed 25 grave shafts, only one of which appears to have been relocated. Both sites were recommended as eligible for listing in the National Register of Historic Places.

While site 15JF924 will not be affected by construction, impacts to Site 15JF923 cannot be avoided, and additional investigation was recommended in the form of Phase III data recovery. Following nearly a year and a half of consultation, a mitigation plan was approved, and a data recovery plan was developed. Numerous consulting parties were involved in this long process, and the city took an active role in the development of the mitigation plan. The first stage of the data recovery efforts began in the Fall of 2018, and was completed in the winter of 2019. Over 200 features were documented on seven selected lots in the area of the complex that was the first to be targeted for demolition. Over the next several years, additional data recovery will be performed in several other blocks of the complex, as the buildings that occupy those lots are demolished. 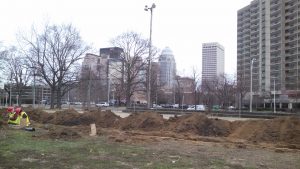 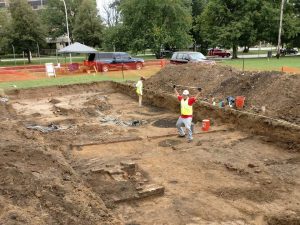