The Day of Archaeology was born in 2011 after a conversation on Twitter (www.dayofarchaeology.com) where the organizers thought it would be an interesting project to have all archaeologists across the world blog about what they were doing on a single day. Swing by their page and check it out – you can search hundreds of posts by topic or by their locations on a map.

In 2012, I was looking for something interesting to blog about when I was invited to something that I’ve never done before. Brandon Ritchardson (soon to be Dr. Ritchardson http://grad.uga.edu/index.php/2016/06/brandon-ritchison-a-doctoral-student-in-anthropology-studies-the-collapses-and-mass-immigrations-on-neighboring-chiefdoms/) was drawing cave art to finish his undergrad honors project. I wasn’t very good at drawing something on the ceiling in the dark, but it was an inspiring project.

This is the post that I submitted to the Day of Archaeology that year – the original can be found at (http://www.dayofarchaeology.com/drawing-cave-art-in-kentucky/) check it out for better photos and to see the other wonderful post generated by the DoA project.

“Awe” would be the word that sums up my experiences on the Day of Archaeology. I spent the weekend working in a cave documenting prehistoric rock art; a project that completely ripped me out of my archaeological comfort zone putting me back into the position of archaeological newbie with a lot to learn.

I spent the project under the care of Brandon Ritchison, an archaeologist who recently graduated with a Bachelor Degree from the University of Kentucky and is on the way to a graduate program in the fall. He was building on research he completed for his Undergrad Thesis and intends to present it at the Southeastern Archaeology Conference this year (so you can get all the details about the research project there, I will not share them in this post for a variety of reasons). I owed Brandon some labor in return for his help on my dissertation field work earlier in the year and I had been in caves numerous times during middle and high school field trips to Mammoth Cave National Park. What I didn’t realize was that this was a “wild cave”… about as far away from Mammoth Cave’s manicured paths, modern lighting, and massive open spaces as you could get.

Packing for this excursion was much different than other projects. We weren’t excavating, just taking photos, drawing, and marking things on a map. My field pack consisted of lots of food and water (it was 106 degrees outside) and light sources (I think I had 7 lights of various sizes), LOTS of replacement batteries, and a long sleeve shirt. Brandon provided a helmet with lantern. 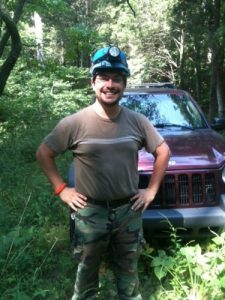 Me geared up and ready to go. I wore a long sleeve shirt in the cave.

The road the lead to the cave was blocked by fallen trees and we had to hike about an hour and a half through the hundred degree weather to the cave entrance. Arriving at the entrance is where I realized that this weekend would be spent outside of my comfort zone.

Instead of a wide cavernous opening (see the Mammoth Cave Website link above for an image of the opening I was expecting) there was a solid rock wall with an opening about .75 meter high at the base of it. I hadn’t asked Brandon about the dimensions of the cave because, honestly, up until that point I hadn’t thought of it. I wasn’t sure if I was afraid of small spaces because, honestly, up until that point I never had to crawl into something so small.

A few things got me through that initial trepidation:

So with an advanced apology of possibly freaking out, I followed the rest of the team crawling into the ground and then it was instantly dark. I mean REALLY dark, to the point where I really couldn’t tell if my eyes were open or shut. Flicking on the lights illuminated a ceiling covered with cave crickets, there was a salamander, and a few bats. 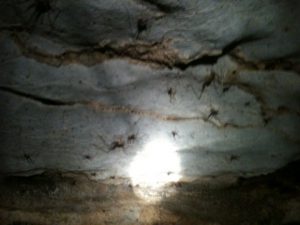 Cave Crickets covered the ceiling in most areas. 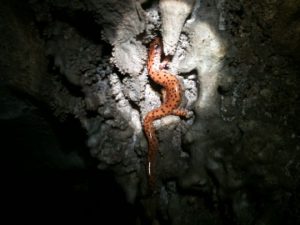 This was years before Pokémon Go.

The map showed that the cave was about 700 ft (200 meters) deep and had multiple passages. The first section that we were standing in was large enough to put a four lane highway in, the ceiling varied from a few stories high to a few feet.

The cave was wet and about half of the walls had been covered in flow stone which had been destroyed by early Kentuckians who mined it and carved the crystalline rock into knick-knacks. The floor was covered with sharp stones from this mining and there were a few traces left of their activity. 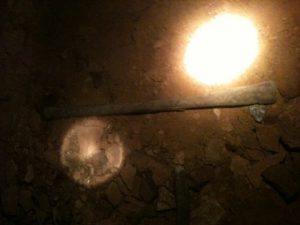 There was a variety of cave art. Much of it was historic graffiti consisting of names and dates of different visitors to the cave. These were either etched into the walls and ceiling or “candle marked” with the soot from torches, candles, or lanterns. 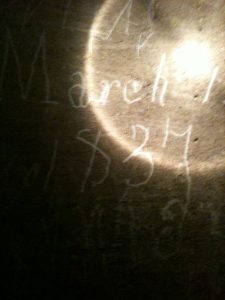 In certain areas there were prehistoric petroglyphs (art that is incised into the rock). Surprisingly, the only way that most of this art was really visible is when your headlight is off and the wall is indirectly illuminated at an oblique angle. This made collections of zigzag lines and concentric squares stand out in relief. Sometimes it was so faint, I wondered if most of the cave’s visitors even realized that it was there. 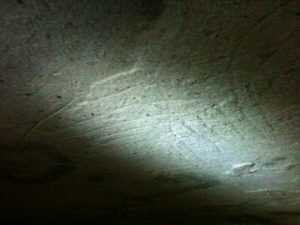 The corner of some concentric squares only visible when the light is at an angle.

Lighting made the art very difficult to photograph and draw, but I opted to spend the day drawing a concentration of art several meters long that covered the ceiling. The other option was to belay across a very deep pit and squeeze through a rock tube that was about the diameter of my shoulder width for about 10 meters before reaching the final cavern. 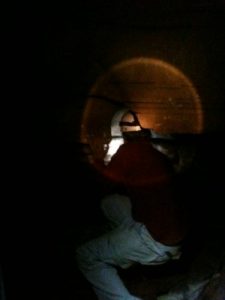 This was the easy part.

Being my first time in a wild cave I decided not to push my luck and I would tackle that challenge when I return on a future expedition. After spending about 8 hours in the cave we crawled back out of the cave.

While the project was fun, the archaeology was interesting, and I was already making a list of caving gear I wanted to buy, but I had never been so glad to see the hot summer sun. 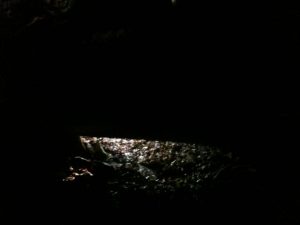